Broadcast Filmjournaal: NELSON MANDELA HONORED WITH THE 4th Golden Plant of The Quantum-Art-Peace-Project ‘The Unifying Field’.

At 25 nov. 2011, the Dutch artists Adelheid & Huub Kortekaas presented this award to Nelson Mandela (in Paarl Z-Africa ) for his persistent struggle against Apartheid, his warmhearted passionate commitment for World Peace and is strong appeal to Democracy, Compassion and Brotherhood. The Golden Seedling and the Golden Plant are the metaphors reflecting Nelson Mandela’s vision:” In every human being is a golden spark hidden”. Both symbols are part of the collective Quantum-Art-Peace-Project : ‘The Unifying Spiritual Field of the World

The 4th Golden Plant to honor Nelson Mandela will be planted in front of the Drakenstein Prison in Paarl where Mandela spend many years of his impressive and inspiring life.

The artists Huub & Adelheid Kortekaas have made it their goal in life to animate life with new importance and inspiration with their images and ideas. ‘All is connected to All’. The Plant is the metaphor for the wonderous need to explore the germ of our human existence’

The 1st Golden Plant was planted in Armenia (1989) by the then president Vladimir Markariants, both as a sign of new life after the earthquake and as a memoration (? remembrance) of the birth of the initiative ‘Europolis’, a city of peace.
The 2nd Golden Plant to Davi Yanomami and Marcos Terena, shamans of the Yanomami Indians, as a symbol of a worldwide respect to all Indigenous People. UNCED Rio-’92, Brasil.
The 3rd Golden Plant was handed to Michail Gorbatsjov, chairman of ‘International Green Cross’(1993).
The 5th Golden Plant was handed over in august 1997 to The International Peace Conference on North and South Korea.
The 6th Golden Plant -within the Manifest Female Energy- will be dedicated in 2012 to one of the most radiating, passionate, spiritual and realistic Woman: Oprah Winfrey, as symbol of the worldwide emerging Female Energy of millions of unknown strong Women who commit themselves to improving their daily reality. See: Manifest Female Energy 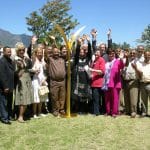