Between 1995 and 1999, they created and built the Tempelhof, a Gesamtkunstwerk inspired by the “physical Measure of Man”.

Two people, bound together by a dream decided to live life as a unique adventure – against the backdrop of the age-old philosophical questions: Who am I? Why am I here? How do I shape this life?

As alchemists, they look for fundamental processes of becoming in life, the golden spark, a gnostic symbol of a new symbiosis between economics and spiritualism, between culture and nature, between East and West, and between individual and society.

In spring 2015 the artists started the quantum art project ‘Which Flower are You?’ by sawing 99.999 Human Flowers as a playful wake-up call to the world, to encourage us to find our connection to each other and to inspire each other to create a more beautiful and peaceful multicultural society. A quantum leap to a more conscious, meaningful and empathetic society. See animation Which Flower are You?

A World Passport for Humanity

‘Fundamentally, mankind is a flower in the metaphysical garden of the world.‘ 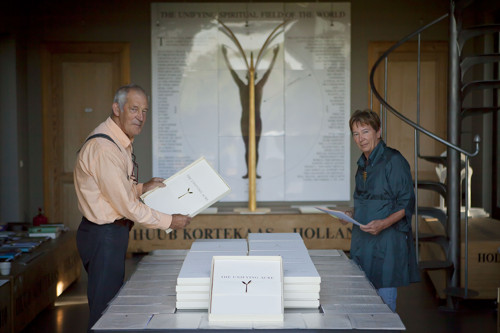 AN ODE TO THE FEMALE ENERGY
A Golden Plant, symbol of ‘The Spiritual Dimension of Man’
is being offered by the Quantum-Art project THE UNIFYING SPIRITUAL FIELD OF THE WORLD to one of the most radiating, passionate, spiritual and realistic women in the world, Oprah Winfrey.
She is the symbol of Women’s Energy that manifests itself more and more vigourously. This Golden Plant at the same time is an ode to millions of unknown Women who devote themselves to the processes of change in the everyday reality. In the light of this manifestation 33 inspired Women from this World Acre will receive a small golden Seedling with a personal letter and a covering document for their unique contribution to the Processes of Change in the World.

This special  Art event Is meant to draw global attention to the unique power of the ‘Female enery’
De Tempelhof, 2010 © Adelheid & Huub Kortekaas

During the miracle of creation, male and female forces materialised – a truly evolutionary vision on the part of the ‘Creator’; after all, the field of tension between both forces has proved to be an inexhaustible source of creative power.

In ancient history, the Big Mother was the symbol of the sacred energy of mankind. In the course of history Woman as Goddess, as utter symbol of fertility and creative power, lost her matriarchal status to an ever increasing prominence of a patriarchal Male Image of God.

The world of art and religion offers a clear and fascinating image of this development in human thinking and action. Here we see that Woman is ‘revered and distinguished’ and put on a pedestal, but stripped of her identity and scope.

At the beginning of the previous century and later on in the 1960s and 1970s, Women’s Lib manifested itself ever clearer, especially in Europe. Woman wants to be liberated from patriarchal society, feel respected and seen as an independent and equal individual.

Viewed in the spirit of the age, Woman, by dint of her direct clarity, open-mindedness, compassion and original, creative approach to daily reality, is stepping out of obscurity and firmly finding her way in the present complex society. The arrival of the limitless Worldwide Web plays an important role in this.

We see that these signals spread across the world and realize that women increasingly have the nerve and the guts to break through existing social structures. They look for new ways to design their lives, fighting for a more humane, more harmonious society. Their decisiveness and resourcefulness increasingly substitute the prevailing and controlling patriarchal cultures.

Women are the key to opening the gates to a new society. If women across the world link up their specific Female Energy, they will be able to approach the disputes and longstanding feelings of hate in the world in their very own way and possibly eliminate or at least reduce them.

Evolution wise the future of the earth asks for a new global zest; the Quantum leap of the consciousness that all and everything is connected. Consciousness becomes a participating consciousness, a transition from individual to universal thinking, from I to we. A new space arises in which the female and male energies can inspire each other equally to grow to a new powerful and creative spiritual world order.

Life as a unique challenge of creation, life as a work of art, life as Quantum-Art.
The human being as a spiritual flower on his way to a ‘New Renaissance’
De Tempelhof, Winssen The Netherlands

Nature manifested itself
as a spiritual source of inspiration.
Spirituality proved to be
the breath of life itself

The Seedling and the big Golden Plant
grow into ultimate symbols of a new image
of mankind and a new world view.

They form part of the universal signs
of the desire to open up
and to grow towards the light:
Man as Quantum-Art

In his deepest essence,
man is like a flower in the
Metaphysical Garden of the world

While travelling to his friend Thomas More, the creator of Utopia, Erasmus wrote his book ‘Moriae Encomium’ (1509-1511). For me this book, together with Marguerite Yourcenar’s ‘Hermetic Black’, were important moments of recognition. Although I dream myself an Utopia, I recognize the reality of Erasmus, but at the same time I feel a strong affinity with Yourcenar when she describes human motivation in time and space. In our work and life, through all its chaos and illusions, we try to examine the limits of our existence, searching and researching the reality behind the reality, and because of that, being constantly underway, full of doubts and hesitations. I feel like a quantum-physician, looking for insight in the fundamental principles of creation. In this great desire for order, in a sense I am reborn time and time again. Inside of me a strong universal commitment is growing, a commitment which I experience as purely metaphysical. And in that sense Adelheid and I, we are not presenting ourself as artists who make art, but as alchemists, looking for the symbiosis between spirituality and economy, between culture and nature, between eastern and western ways of thinking, between the individual and his society. I do not in so many words hold a vision towards reality as it is, but I see reality as an illusion, and illusion as reality. This is what we call Quantum-Art. Herein consciousness becomes a participating consciousness, a transition from an individual towards a universal way of thinking, from I to we. In the end, we experience that spirituality is the real driving force behind all life, the golden thread that connects everything and everyone. In this consciousness a process is developing in which Art offers fundamental possibilities to act as a bridge between this awakening spirituality and our present materialistic economy. our work is a manifest of a continuing change of consciousness as a “natural” desire to create an essential contribution to our growth towards a universal world-order. It is an illusion not to believe in the illusion.